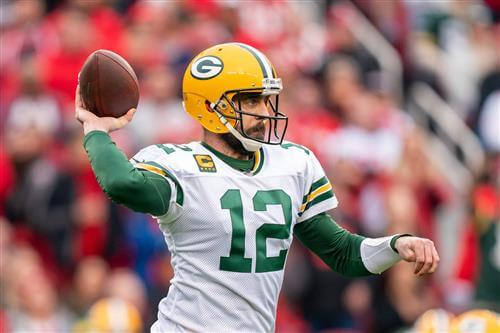 This NFL offseason is about to be crazy. Deshaun Watson looks to be on his way out of Houston and Matthew Stafford will almost certainly be on a new team. If that wasn't enough QB star power on the move in the league, there's now some serious rumblings that Aaron Rodgers could be done with the Packers after their loss to Tom Brady and the Buccaneers over the weekend. Rodgers himself added some fuel to that fire, saying that his future is uncertain. Then NFL scoop lord Adam Schefter tweeted this morning that Rodgers' future is way more in his own hands than the Packers.

The star QB has an opt-out of his contract after this next season, which only adds to the speculation. Throw in the fact that the Packers drafted a QB in the first round of the 2020 NFL Draft and we have some serious gas on the fire. There's no telling how much the Packers could get in return for the future Hall of Famer, but you'd have to think it'd be significant.

This is essentially the same situation as what we wrote about the 49ers for Matthew Stafford. They're a QB away and adding Aaron Rodgers would immediately put them in contender status in the NFC. The draw here for Rodgers is he'd be going back home to play in California. Could you imagine his playmaking in Kyle Shanahan's system? That would be unreal to watch. Sorry Jimmy G, but you might have to go.

You have to think that Bill Belichick is smiling somewhere right now. Not because Tom Brady is heading to another Super Bowl, but because of all of the star QBs who could be available this offseason.