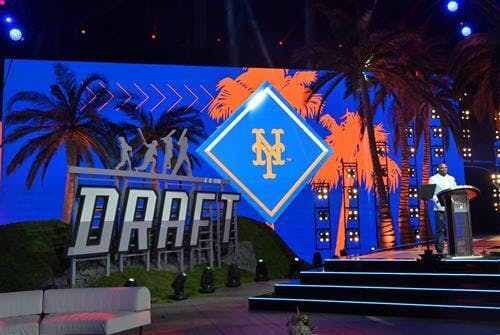 The 2022 MLB winter meetings will begin Sunday, and while the MLB talent changing teams in blockbuster trades can often steal the headlines, the prospects who go the other way in those deals often wind up being the bigger story.

Workhorse right-hander Jeff Samardzija going from the Oakland Athletics to the Chicago White Sox during the 2014 winter meetings was one of the biggest stories to emerge from the four-day event, but years later it became clear the South Siders lost that trade when Marcus Semien and Chris Bassitt emerged as impact players in Oakland.

Ahead we've taken a look at 10 notable prospects who could find themselves at the center of blockbuster deals during this year's winter meetings because of a blocked path to the majors, some boom-or-bust potential or their proximity to the majors relative to their team's window of contention.

Here's hoping we see at least a few exciting deals struck in the coming days.

The Los Angeles Dodgers had enough catching talent in the organization to include Keibert Ruiz in the Max Scherzer/Trea Turner blockbuster deal at the 2021 trade deadline, and they have another top-tier catching prospect who could be viewed as expendable in Diego Cartaya.

The 21-year-old posted an .892 OPS with 22 doubles, 22 home runs and 72 RBI in 95 games between Single-A and High-A in 2022, and while his receiving skills remain a work in progress, he has middle-of-the-order offensive potential.

With Will Smith entrenched as the MLB starter and 2022 second-round pick Dalton Rushing hitting .404/.522/.740 with 19 extra-base hits in 30 games in his pro debut, the Dodgers can afford to flip Cartaya to fill another need without mortgaging the future at catcher.

With their window to contend wide open and a wealth of young outfield talent in the majors and the upper levels of the minors, the Seattle Mariners could consider flipping teenage outfielder Gabriel Gonzalez for more immediate help this winter.

Rebuilding teams love to stock up on lower-level prospects with tools, and while Gonzalez does not have one standout skill, he's above-average across the board with a chance to hit for average and power while playing a solid corner outfield if the pieces fall into place. Don't be surprised if he climbs onto leaguewide Top 100 lists in 2023.